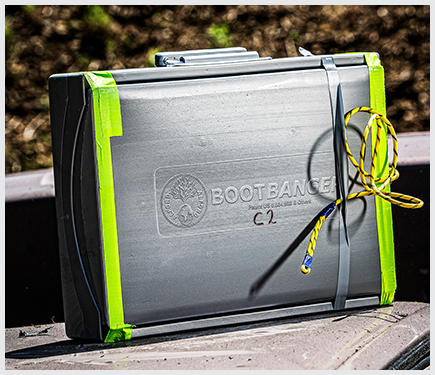 The BootBanger is a water disruptor for use against Vehicle-Borne IEDs (VBIED).

The BootBanger™ Mk4 is one of the most trusted and successfully used water-tamped explosive charges by IEDD Operators. BootBanger™ has been widely fielded around the world and it played an important role in countering the Vehicle-Borne IED threat in Iraq.

The Boot Banger™ uses a patented technology for producing a shaped charge using sheet explosive or detonating cord as the propellant and water as the projectile. It consists of two containers: a tamper and a projectile, which are fitted together, sandwiching the explosive charge. The projected water penetrates the floor or sides of vehicles and ejects and disrupts bombs or explosive materials without causing their initiation. The tool is provided empty and is loaded with explosive and water by the user. It is probably the most popular man-portable vehicle disruptor on the market and the most powerful of its kind.

The BootBanger™ has been used to successfully defeat real IEDs in several countries including Iraq and Afghanistan. Even with the lightest load, it is capable of removing several 155mm projectiles from the boot of a vehicle.

Alford Technologies is an award-winning UK based company that specialises in developing highly innovative explosive tools to support Explosive Ordnance Disposal (EOD), Breaching/Explosive Method of Entry (EMoE) MiniModand Explosive Engineering communities. Alford products are used by militaries, police, law enforcement and commercial companies from across the globe. The company was founded in 1985 by Dr. Sidney Alford – a pioneer in explosive charge technology – who invented the world’s first liquid-lined explosive disruptor.

The company has built a formidable reputation as one of the world’s leading innovators of explosive tools. The explosive tools from Alford Technologies deliver omni-directional, linear, point-focal disruptive effects suitable for most explosive cutting tasks. Alford Technologies is the market leader within the areas of EOD, IEDD and CMD, and Alford has twice been awarded the Queen’s Award for Enterprise & Innovation.