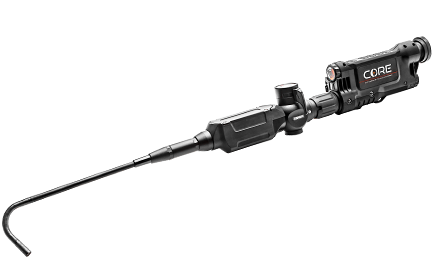 The CORE 8mm Video Scope allows you to capture digitally encrypted video with extreme low light sensitivity. The 4-way articulating camera neck (160° up, 130° down, 100° left & right) is controlled via fine touch paddles, allowing you to easily position the camera. Video is streamed wirelessly to the CORE monitor over an AES Encrypted channel. Like all CORE Cameras, the CORE 8mm Video Scope is modular and will connect to any handheld CORE Grip. An external light source can be added to provide illumination at the distal tip of the Video Scope. The light source is available in the following colors: EOD/UV, Blue, Green, White, and IR 850nm.

An optional hardwire cable connection is available for RF-restricted environments. Additionally, a 1.0in eyepiece displays video without requiring a separate monitor.

The CORE 8mm Video Scope attaches to the CORE Grip and includes the following features: