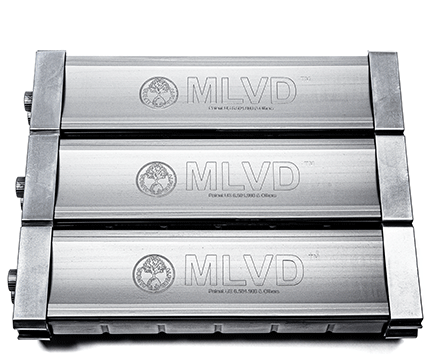 The Modular Large Vehicle Disruptor Mk2 is a modular water disruptor for use against Vehicle Borne IEDs (VBIED).

The Modular Large Vehicle Disruptor™ Mk2 has the same explosive and hydrodynamic geometry as the original MLVD™ but is now supplied as three separate modules which may be used together (to have the same performance as the original MLVD™) or in different configurations, depending on the target.

A single array of three modules is typically aimed at the side of a vehicle known or believed to contain a bomb. For larger vehicles, two or three modules may be used along the length of the vehicle to ensure disruption of all parts of the IED. When actuated, the MLVD™ projects the water jets horizontally with such force that the side of the vehicle is penetrated and the bomb ejected through the opposite side. It is usual for the entire compartment which is attacked to burst open giving a clear view of the vehicle bed and of any debris remaining upon it. The MLVD™ has been used to attack vehicles containing live targets without any sign of initiation.

Two modules may be used as an under-vehicle charge to remove IEDs and may be used in similar ways to both our BootBanger™ and the (now discontinued) EXIT™ charges.

Single MLVD™ modules may also be used to breach doors and walls. Using the charge with and without standoff will produce different results: either cutting right through a target or “kicking” it in. The ability to vary the load gives it a wide range of uses. In addition, filling the projectile with an irritant, such as pepper, will give breacher’s an additional element of surprise and confusion at the start of an action.